You’ve spent some time snapping with a girl from class, you’ve hung out a few times outside of class and things are going well.

She sends you a message that says “HMU to FT” and you feel a bit dumb asking what that really means.

Want To Know Every Single Snapchat Slang Word? We compiled a list of 300+ Snapchat acronyms and words and defined every single one!

Check it out here!
snapchat ft

What Does FT mean? It means FaceTime

FaceTime helps me a lot. I feel like I’m at home even though I’m not.  – Stephen Curry

If someone sends you a text or a snap and says “lets FT” they want to FaceTime with you, p.s. if Stephen Curry wants to FaceTime you better be sure to pick up the phone!

You may wonder about different platforms, let’s clarify those here: 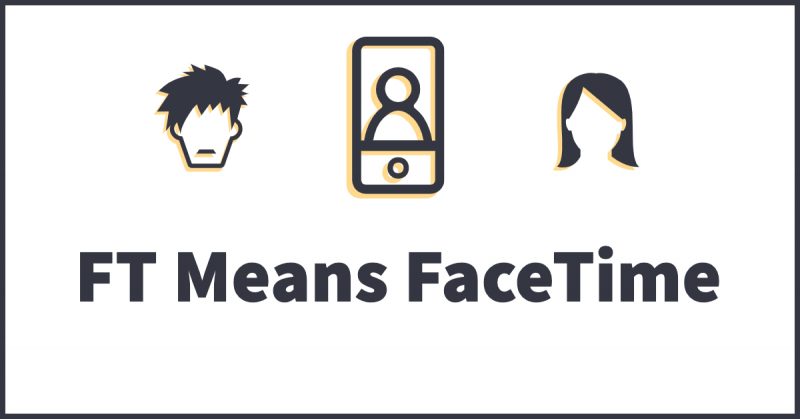 Yes, you can absolutely just make calls or video calls, similar to FaceTime on the Snapchat app itself. In fact, you can video chat with up to 15 friends at one time.

This feature has been around for a few years now but people may not notice it. To do a video call right in Snapchat you can follow these steps. Keep in mind, you can always do a voice-only call by simply deactivating your camera. Same as a FaceTime audio call. 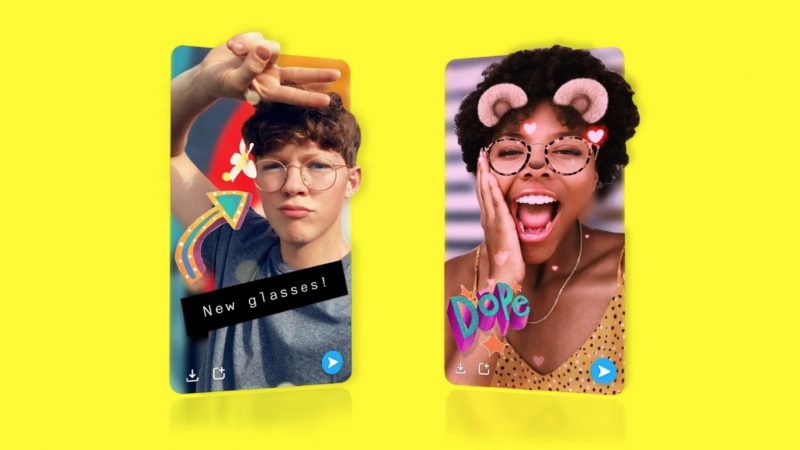 One advantage of using FaceTime instead of Snapchat video call is the FaceTime allows for more users on one video call at a time. On FaceTime, you can have up to 32 users on one single group video call. Compare this to Snapchat, which limits your video call to 15 friends. Of course, I would never get even close to that so it doesn’t really matter. But if you wanted to video call your entire class, then FaceTime may be your better option!

***NOTE: Snapchat warns you that the person you’re calling can see your video before they accept the call. That means don’t pick your nose before they answer because they can see you!

The video quality and sound quality is pretty good, but to be honest I think it’s better on FaceTime. However, if you’re chatting with someone on Snapchat and they want to video chat, it’s often easier to just use the exact same app instead of switching to another app.

Does The Abbreviation FT Mean Anything Else?

To be honest, most of the time when someone says “FT” they mean FaceTime but there are occasions where the person meant something else entirely. We’ve seen FT used on Instagram, Facebook, Snapchat, WhatsApp, etc. and almost in every case they person means to say FaceTime. But, there are always exceptions and that’s what we’ll discuss below.

In some occasions the person may mean to say:

While these are specific to Snapchat, you can really use any of these abbreviations in a text, group forum, or any other messaging app.

Ok, so now you know what FT means across social media, let’s chat about how you can actually FaceTime your friend.

How To FT A Friend

So you made a friend on social media and want to move from texting or Snapchat to FaceTime. The first and most important requirement is that both you and your friend have an iPhone, iPad, iPod Touch or a Mac computer.

Pretty much any Apple product allows you to FaceTime but at this point, you can’t FaceTime if you have an Android or Windows device, womp womp. If you’re on Android you can use Google Hangouts, Skype, WhatsApp, Facebook Messenger, etc. to make video calls.

So now that we know both of you have a device like an iPhone to FaceTime let’s hop on the call. Keep in mind for the steps below you will need two things.

One is that you will need the FaceTime app on your iPhone. While it comes preinstalled, you can manually delete it. If you did delete it, you will need to reinstall the app. The second thing you will need to make sure is that FaceTime is turned on on your phone. You can check it by going to the settings app and scrolling to FaceTime. Tap on it and make sure the toggle in on!

How Popular is FaceTime?

Apple has been really scarce with statistics around FaceTime and how many people use the app each day, how many FaceTime calls are made, etc. The only thing we found was this article back in 2014, yes, I know it’s over 5 years old but I couldn’t find any new information.

The article says that during an investor call, Tim Cook the CEO of Apple said over 40 billion iMessages are sent every day and 15 to 20 million FaceTime calls are made daily. Imagine how much has changed since 2014. In 2014, 170 million iPhones were sold. Since then, Apple has sold 210+ million iPhones every year. Meaning the number of iPhones in the world has grown by over a billion since that report came out.

There’s no new information on how popular FaceTime is, but we do know that since 2014 Apple has sold many hundreds of millions of iPhones, Mac computers, iPads, etc. That means the number of FaceTime calls every day is likely tens to hundreds of times more than the 15 to 20 million number quoted 5 years ago.

Warning About FaceTiming With Strangers!

No one can know the intention of someone else and when someone says let’s FT they may be a friend you know from school or a predator without the best intentions.

Keep in mind that you should ONLY FaceTime with someone that you have met in person before. As tempting as it may be it’s not worth Facetiming with a creep. Of course, if the person is in your school and you know them from class or soccer practice or somewhere else feel free to FaceTime with them. But in today’s society, it’s important to keep your privacy protected and constantly be on the lookout for creeps.

If you’re on Snapchat and someone wants to FaceTime that you don’t know stop and think. Are you getting bad vibes from this person, do you know this person in real life, does the person sound too good to be true? When in doubt Do NOT give the person your personal cell phone number. Keeping your personal information private is vital when it comes to online social media.

If you feel that the person may not be who they say they are or if you have bad vibes from the person please block the Snapchat user and report their behavior to Snapchat. Unfortunately, in 2019 it is all too common for people to have ill intentions or be creeps. Just make sure you don’t fall into any traps. 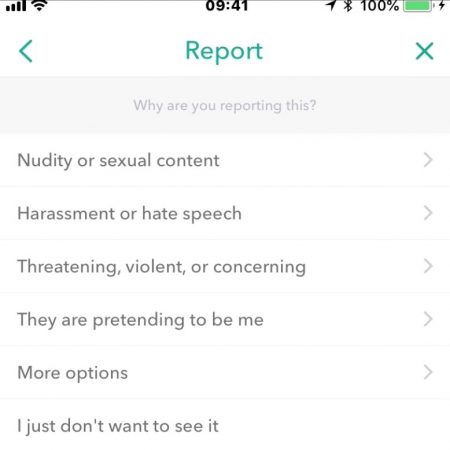 You can report a Snapchat user by pressing and holding on a Snapchat user’s name. From there, a dialogue box will pop up giving you several different options, one of which is to report the user.

Snapchat has a great resource on how to block users that you can find here. To report abuse or an abusive message on Snapchat you can head to this link.

Remember, Snapchat is fun and bringing your conversation over to FT is harmless in many instances but it’s important to keep your privacy protected from strangers and always err on the side of caution when online.