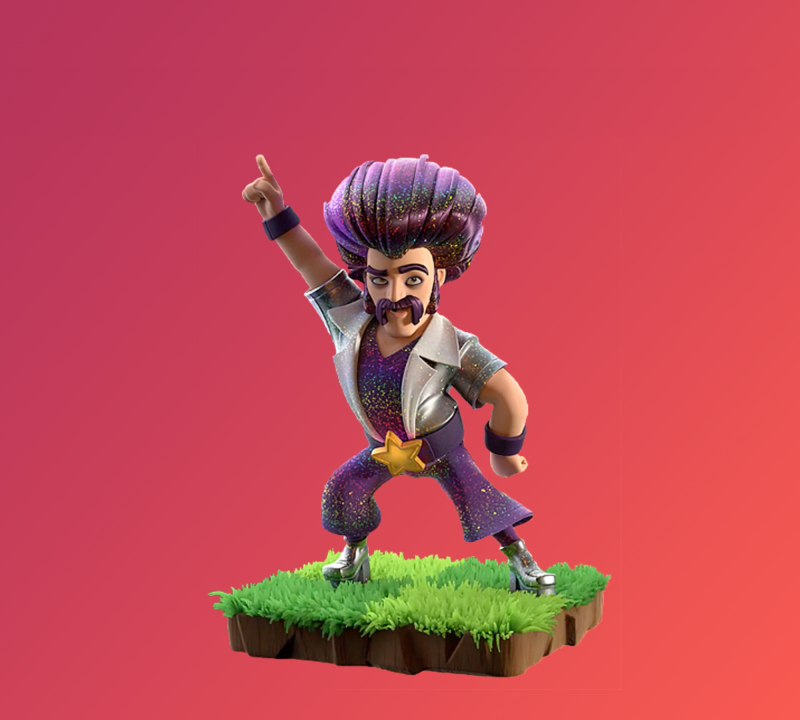 In just a little over 2 days, Clash of Clans will celebrate their 7th anniversary. Hard to believe it has been around that long and August is usually one of our favorite months for CoC due to the birthday specials.

You probably noticed the event if you opened the app recently and while they gave us a preview of what’s to come we won’t know exactly all the details until the actual event.

There were several great teasers but the one we’re most excited for is the Clash of Clans party wizard!

Here’s a screenshot from the teaser with a bit of information on the party wizard: 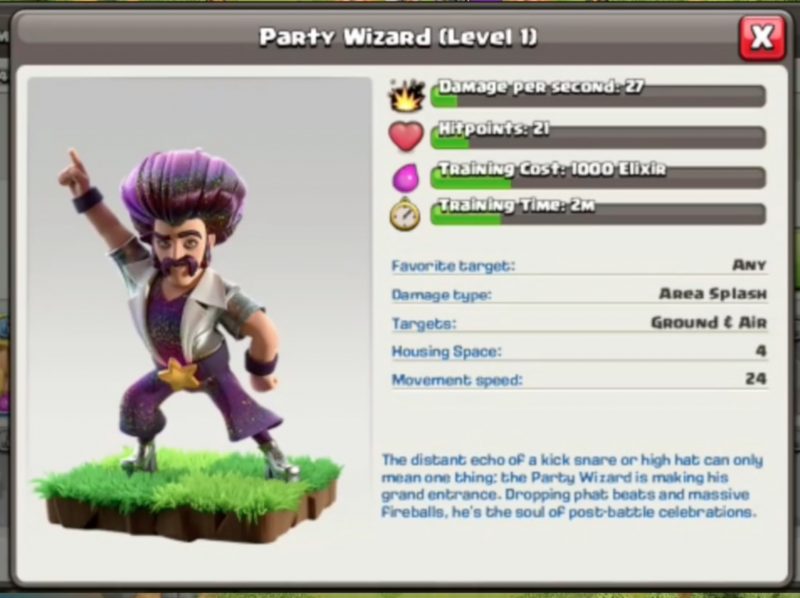 Here’s what Supercell has to say about the Party Wizard

The distant echo of a kick snare or a high hat can only mean one thing: the Party Wizard is making his grand entrance. Dropping phat beats and massive fireballs, he’s the soul of post-battle celebrations.

So what do we know about the newest troop member, at this point, we have to rely on what the teaser told us.

What is clear at this point is that the party wizard will be a fun addition to the troop! Everyone likes a party and this guy will certainly bring it. We’ll have to see how these “massive fireballs” play out in the battlefield, though.

The party wizard is straight out of the 80s with a large purple poof and a disco fever mustache and sideburns. Here’s a quick side by side comparison of the new party wizard versus normal wizard.

As you can see from the table above the Party Wizard is lacking in damage per second and hitpoints but offers a 50% boost in movement speed.

The party wizard’s strengths will lie in his speed. So this will be a good troop to lead the attack and will be able to run away quickly when necessary.

As the party wizard levels up his clothing will almost certainly change but as of now, we’re not sure how it will change. Perhaps a different hair color, a bit of a grey streak or turn his shirt color. For the original wizard, his cloak changes from light blue to light purple to dark blue and then ultimately to a deep violet at level 6 along with glowing fire eyes. 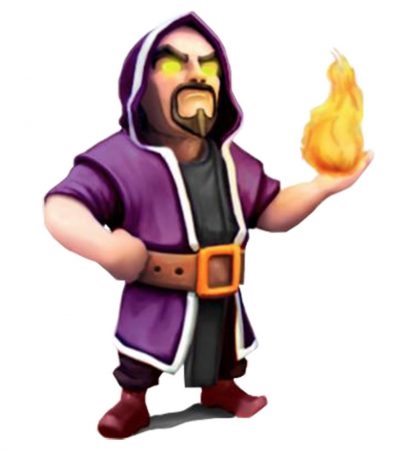 Other Teasers For The CoC 7th Birthday

There are a few other things we should mention that were highlighted in the teaser reel. There was a mysterious brown gift box adorned with a yellow ribbon that we haven’t seen before. Word is, it will give the player 50,000 Elixir along with a short animation of opening the gift box.

To go along with the party theme the Anniversary Skin is supposedly the “Party Warden” as a substitute for the grand warden. With similar purple hair coloring but with a giant gold chain, a boom box, and a microphone the party warden will amp up the CoC party.

If you didn’t get the hint by now, the guys and gals of Supercell are into partying to celebrate the Clash of Clans 7th anniversary! We think we’ll be partying too.

So, now that we know that the party wizard isn’t an option, what we can do is look toward the regular wizard to fill in his roles. Overall, it won’t be all that different since their features weren’t very dissimilar. The main thing is we’ll have to deal with a slower wizard but thankfully that slowness also comes with more firepower.

To be honest, Clash of Clans was initially released on August 2nd, 2012, meaning it’s been over 7 years since it was released. The game was and is an iconic gaming app that in many ways rebuilt the idea of how a company can make money from gaming apps. However, the app is a bit old now and their recent notice that they will remove global chat has us a bit bored with the game.

I understand the reason they’re removing the global chat, for sure. Most of the time it quickly goes downhill and there are inevitably inappropriate comments, bullying, etc. that needs to be moderated. Supercell simply decided it wasn’t worth spending the money and time on the global chat feature when it didn’t add a lot of good positive dialogue around the game. Or at least, that’s what they’re saying. I’ve had both good and bad experiences but do think I’ll miss it.

This, combined with what we felt was an underwhelming birthday release compared to last years has us a bit unexcited about the app. What are your thoughts, leave them in the feedback button below? Do you think CoC is just as fun and exciting as when it was released over 7 years ago or has it gone downhill since the first few years?

What is certainly true is that the game is still incredibly popular among mobile gaming fans, something that we don’t see changing anytime soon.

Snapchat is notorious in their use of random symbols and sometimes not being very clear on exactly what they mean. Here we’ll cover everything you need to know about the […]