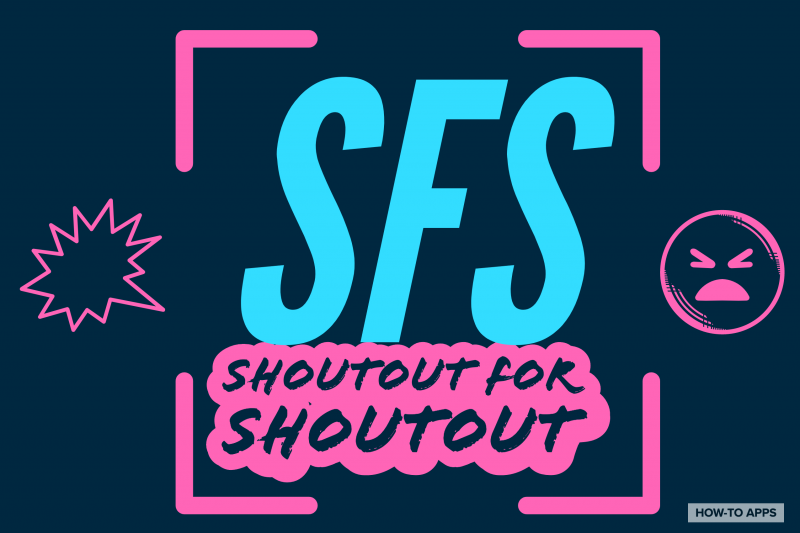 I feel like every other day I’m hearing new acronyms that I don’t know what they mean. Just the other day, I was watching a Snapchat story and someone put #SFS on the story.

I realized to myself, a lot of people may not know what that is. Fear not, I’m here to explain exactly what SFS means on different platforms and situations and give you some alternatives as well.

What Does SFS Mean?

What does SFS mean? SFS stands for “Shoutout For Shoutout”

Shoutouts to Cardi B. She’s going to be a great mom. – Rico Nasty

While that may immediately answer your question, you may still be scratching your head what exactly a shoutout is and why would someone want to trade shoutout for another shoutout? 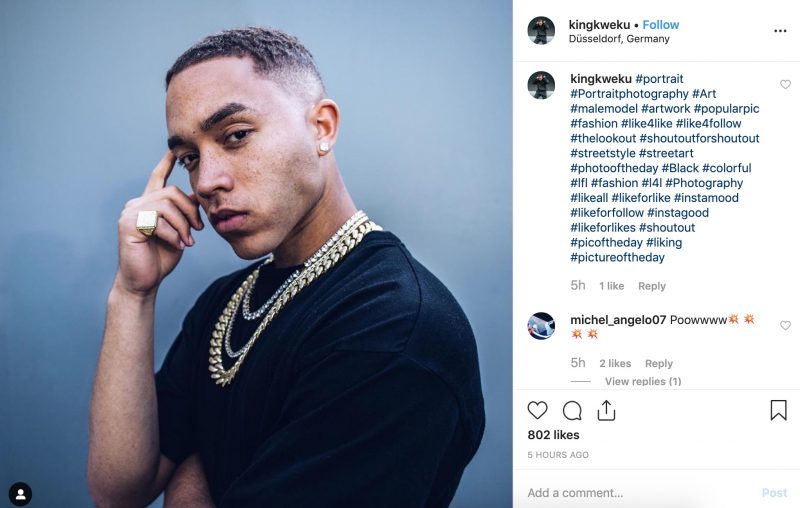 While this can mean something a bit different, it’s commonly used on Snapchat, Instagram and other social media platforms.

What Does Shoutout For Shoutout Mean? SFS Definition

Shoutout for Shoutout Meaning: When two people agree to tag or indicate the other person in their post or story so both sides get exposure to one another’s audience.

You may know by now that a key way to grow your social media following is to use “influencers” to help you get a bit more exposure to your account. The snippet below from this Forbes article sums up what influencers are and how they are powerful voices in their own niche.

In doing so, the influencer photographer shares all of his/her audience with your images and hopefully, some of the influencer’s fans will become your fans.

One of the most common platforms you’ll see SFS is on Snapchat. This is used as a tool to gain more followers for people that are working toward becoming influencers on Snapchat.

What does SFS mean on Snapchat? SFS means “Shoutout for Shoutout” on Snapchat.

You may have seen SFS used in a couple of different ways. One is that you could have seen a snap where someone is requesting other people to agree on a SFS with them. In other words, that person is looking for someone to shoutout their profile in exchange for a shoutout as well.

The other potential way that you may have heard it used is during the actual shoutout. In this case, you may have seen someone on Snapchat you follow tag another user and add in #sfs into the story. In this case, most likely your friend has agreed to tag someone in exchange for a tag as well.

The hope here is to get more followers on Snapchat, and the statistics are there that using influencers for shoutouts does work, albeit with some caveats. 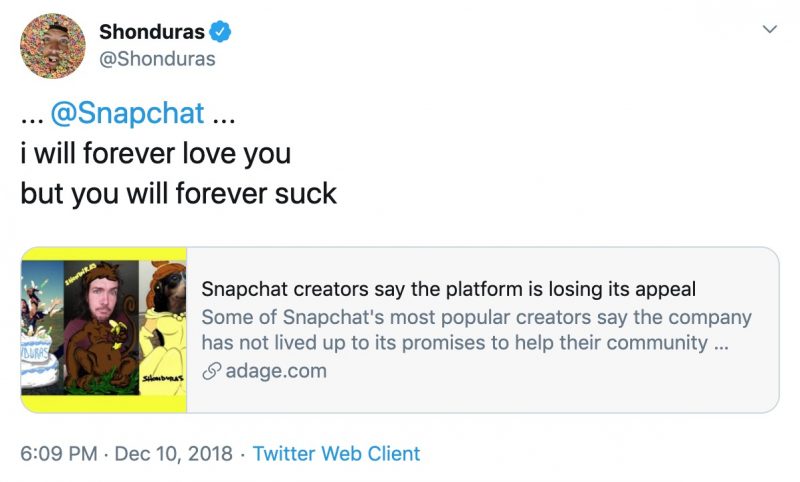 SFS has become widespread on Snapchat, but ultimately it’s losing some appeal with lots of users moving toward Instagram and TikTok as their preferred methods of going viral or becoming an influencer. 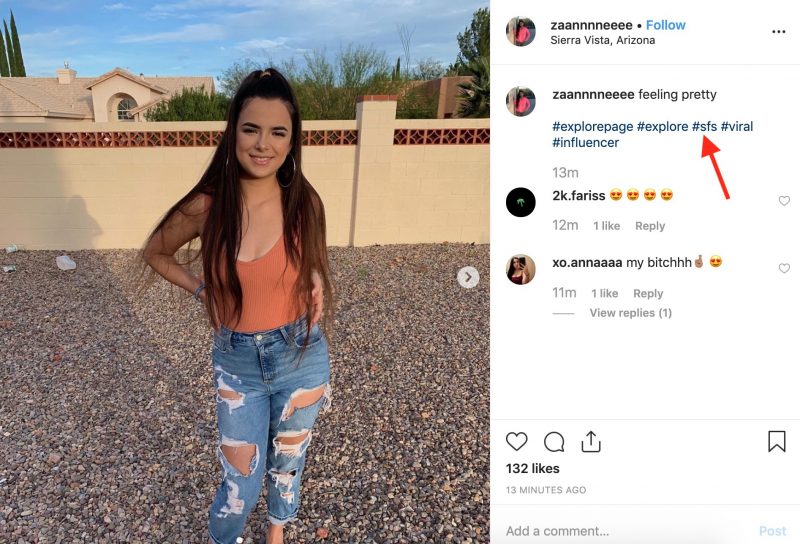 Next up, we’ll cover Instagram SFS or shoutout for shoutout tags. The screenshot above is a perfect example of someone using this technique. Instagram user Zaannnneeee tags her post with #sfs as well as #influencer, a key giveaway that her plan is to become an Instagram influencer.

SFS on Instagram is a bit different than using it on Snapchat. The reason for this is because Instagram also uses captions so you can both tag someone in a picture as well as in the caption of the actual post.

I’ve seen it done both ways, where someone shares an Instagram image and the person they’re doing a shoutout for shoutout with is in the actual photo with them, in this scenario the user just tags the other person and essentially gives a “shoutout” to the other person. The second method is by far the most popular, let’s discuss it below.

The original tweet by @ayoair has, at this point, 750k likes. What _theblessedone has done in this scenario is a shoutout to the awesomely popular tweet by @ayoair and shared it with their following.

This shoutout method works phenomenally well. Scroll through _theblessedone’s IG account (note it’s a private account so you’ll have to request following) and you’ll see this is 99% of what they do on the account. Shoutouts to other famous or viral posts. This has garnered the account 2.2 million followers! 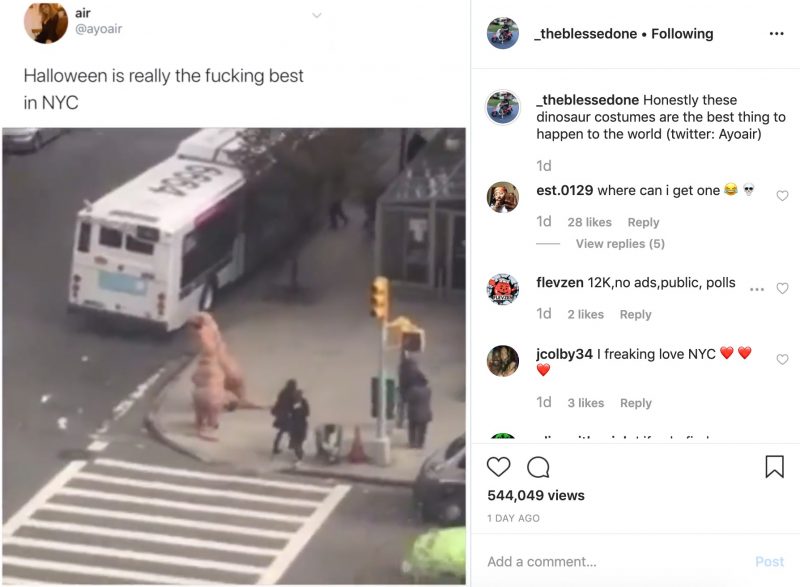 Instagram is the most popular social media network for influencer marketing and thus shoutout for shoutout works the best on this platform. It is truly what Instagram is built for.

If you see SFS in a text message or while texting a friend it could stand for a number of different things. Typically, on social media, SFS means shoutout for shoutout, or in other words, let’s help publicize each other’s accounts. In texting that doesn’t make quite as much sense.

What does SFS mean In Texting? SFS means “So F*cking Stressed” in texting.

Thus, there is the potential that SFS means something different in texting. Here are some SFS alternative meanings.

SFS can mean lots of things in texting and it’s really important to know the context clues of the abbreviation in order to figure out what the person is trying to say. 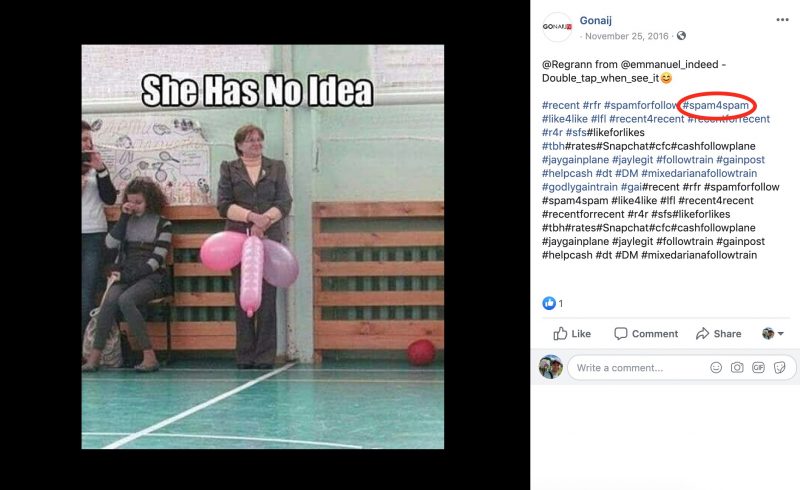 SFS isn’t as popular on Facebook and the reason for that is that influencers aren’t as common on Facebook.

When asked the question “What social media channels are most important for influencer marketing?” 89% said Instagram and Facebook fell to third at 45%. By the way, YouTube was second at 70%.

Hence, more people use Instagram and YouTube for influencer marketing so thus you can expect those two platforms to use shoutout for shoutout more frequently.

However, as you can see from the post above, we do see some #SFS on Facebook posts. However, I wouldn’t recommend starting with Facebook as your SFS platform since it really isn’t as optimal as some of the other options out there, namely Instagram and YouTube.

While Facebook is the most popular social media platform, it’s not the most popular for influencers so when looking for shoutouts, we recommend focusing on Instagram first then YouTube if you do a lot of video content. 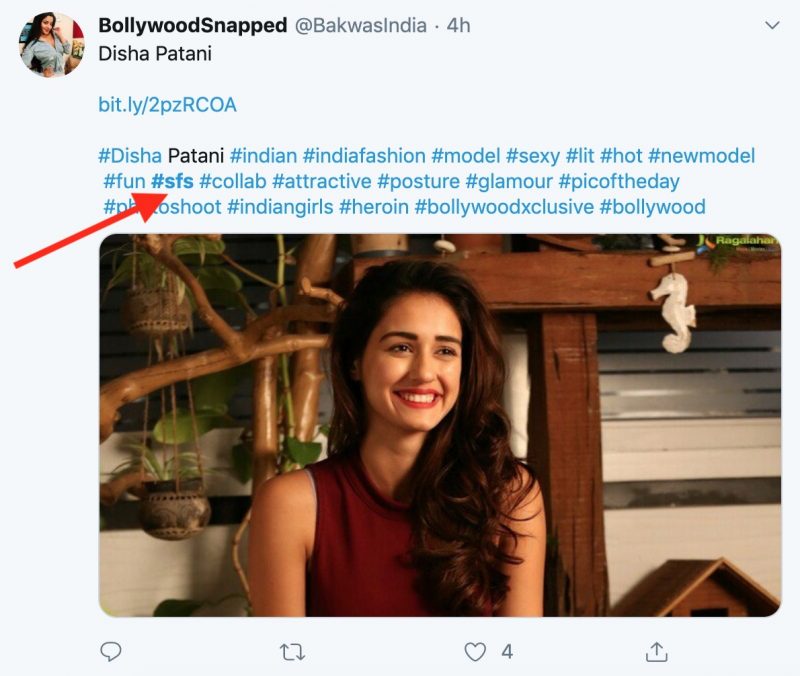 Let’s be honest, Twitter isn’t the social media platform that people do the same sorts of shoutouts as on other platforms. However, it’s a huge platform for tagging other people either in response to their tweets, retweets, or comments on someone’s tweet. Thus, we felt it needed to be on this page.

Twitter is probably the best social media platform out there for cross-contamination between different audiences of similar or like-minded brands or people.

Twitter is a platform where brands can immediately reach and interact with their users. Thus, it’s important for brands to be aware of and engage with influencers surrounding similar lifestyles as their brand.

For instance, if you’re @patagonia you likely want to follow and engage with the incredibly popular outdoor photographer and videographer @jimkchin. Jimmy Chin is known in the outdoor adventure space and if he promotes your brand you’re definitely better off afterward. 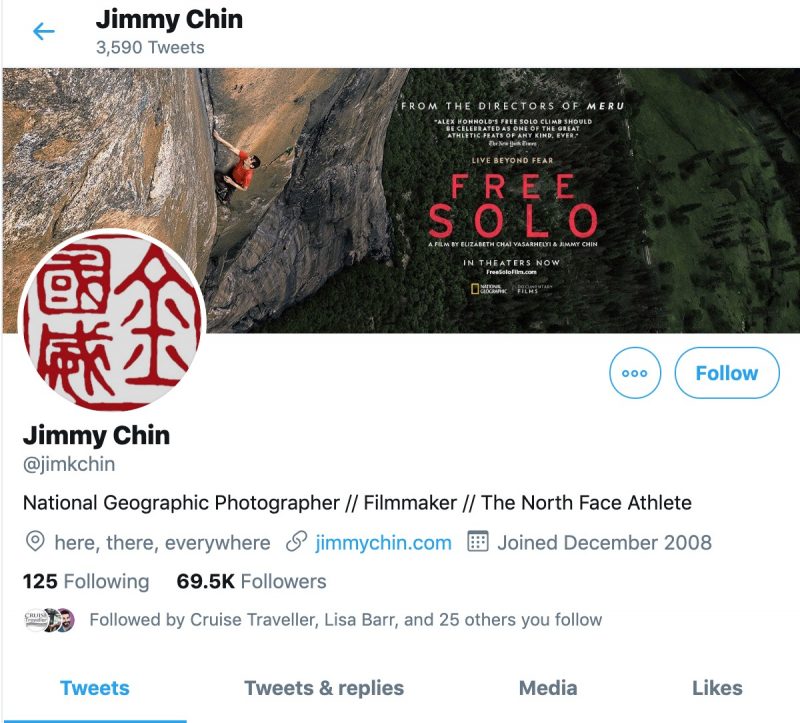 You may have heard of Jimmy Chin, he directed the award-winning documentary Free Solo, which portrayed “climber Alex Honnold on his quest to perform a free solo climb of El Capitan in June 2017.”

Therefore, while shoutout for shoutout doesn’t exist as much on Twitter, it is a platform where people engage with others related to their brand or hopeful to bring someone into their personal brand.

While shoutouts on Twitter don’t appear in the same form as they do on Snapchat or Instagram, they are still an incredibly useful tool to gain followers and grow your brand.

The Rise Of SFS Dovetailed With Social Media Influencers

Take a look at the graph below showing Google Trends of SFS keyword search since 2004. What you’ll notice is that in the last couple of years the popularity of SFS has skyrocketed.

*Note: Google Trends tracks how popular certain keywords are throughout time. Thus, the figures below show a relative sense of how popular different topics are by how many people Google Search for them. Keep in mind, each keyword is normalized to a 1 to 100 scale so even if some other keyword is much more popular than the other, they can appear similar since they’re both normalized to a 1 to 100 scale. 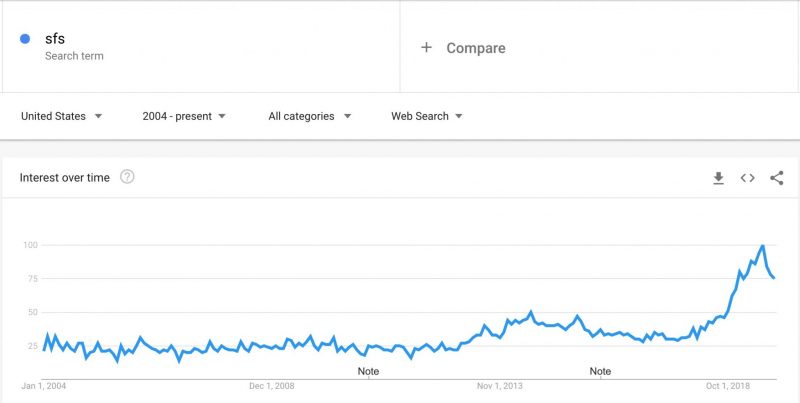 Now, if you compare both “SFS” and “Influencer” in Google Trends popularity you’ll see both have similar increases in popularity in the past few years.

Influencer marketing continues to grow significantly while SFS has somewhat dropped in popularity over the past few months. This could, in part, be due to some alternative meanings of SFS that we discuss here. While SFS primarily means shoutout for shoutout some people have different uses for the abbreviation.

That wraps up this post and hopefully gives you a picture of what SFS means in different scenarios and how vitally important it is in influencer marketing and growing either your personal brand or your company’s brand.

So the next time you see SFS think to yourself, should you take that person up on the offer and give them a shoutout on your Snapchat story? Sometimes that person could be the key to growing your popularity and your user base well beyond what you normally could otherwise.
Next Up!
100+ Aesthetic Roblox Usernames Well Worth Your 1K Robux!
30+ Kik Messenger Statistics & Must Know Facts
Surprise! How To View Someone’s Snapchat Story Without Them Knowing
How Many YouTube Channels Are There?
Snapchat Hourglass ⌛️: Is Your Streak About To End?
Was this article helpful?
That's great to hear! We're glad you found the article helpful. Feel free to share it with your friends!
Share on Facebook Share on Twitter Share on Pinterest Share on WhatsApp Share on SMS
We're sorry to hear that! We love feedback :-) and want your input on how to make How-To Apps even better.

We all live multiple lives on social media, oftentimes creating different personas on the social media platforms we use. We may share big life events and accomplishments on Facebook whereas […]