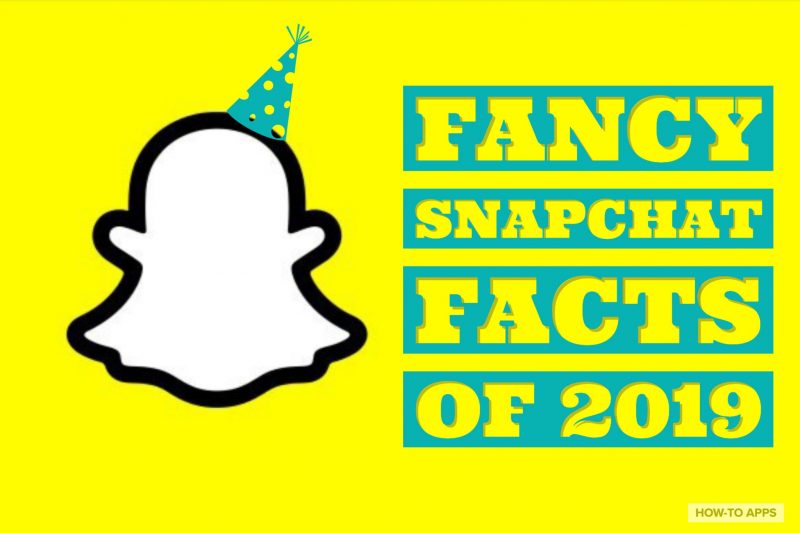 In Snapchat’s 8 years it went from a concept in dorm rooms of Stanford to a multi billion dollar company on the stock exchange. It has become the app of choice for a large portion of teens and young adults and innovated both ephemeral social media postings as well as artificial intelligence filters.

After Facebook tried to buy Snapchat in 2013 for $3 billion and the founders turned it down, Facebook decided to compete directly with the app.

Since then, Instagram (owned by Facebook) has adopted ephemeral stories and AI-based filters to directly compete with Snapchat. It, by and large, worked, slowing Snapchat’s market share and accelerating the growth of Instagram in recent years.

1. There are nearly 2 girls for every 1 guy on Snapchat

If you’re a guy on Snapchat looking for a girl to date, you have some good ratios. About 61% of Snapchat users are female, compared to 38% male. It’s interesting there is such a difference in the proportion of women versus men. When comparing Instagram, the proportion of men versus women are nearly equal with only a fraction of a percent more women.

The cute little ghost you see on the Snapchat app icon is named Ghostface Chilla. The name is based on Ghostface Killah from the Wu-Tang Clan. Obviously, the founders were fans of the Wu-Tang Clan. To be honest, they’re not super popular today but do have an old school appeal.

It didn’t last very long but the famous singer Taylor Swift and Snapchat co-founder Evan Spiegel were once a couple. Spiegel reportedly dumped Taylor Swift, although both sides have kept very quiet about it. Although, T. Swift has a history of writing songs about her breakups…

Breaking that down, over 60% of them use Snapchat every day at 190 million people. The US population is estimated at 327 million, meaning Snapchat is nearing having an active user base equivalent to the population of the United States!

Of all Snapchat users, 73% of them in the United States are aged 18 to 24. As that population ages, we’ll see whether Snapchat’s demographic ages as well or if users drop the app once they get into their late 20s.

When Snapchat first came out it was called Picaboo. But in 2012, a year after it was originally started, the founders renamed the app to Snapchat when they launched an Android version. That finally explains where the ghost icon comes from.

7. Over 3 billion snaps every day

One snap for every person in the world is created every ~2.5 days. Of the 3 billion snaps created every day, they add to the 14 billion Snapchat video views per day.

Of all the US teenagers, 41% of them said that Snapchat is their preferred platform of social media. What’s the second most popular app? Instagram at 35%, followed by Facebook and Twitter tied at 6%. 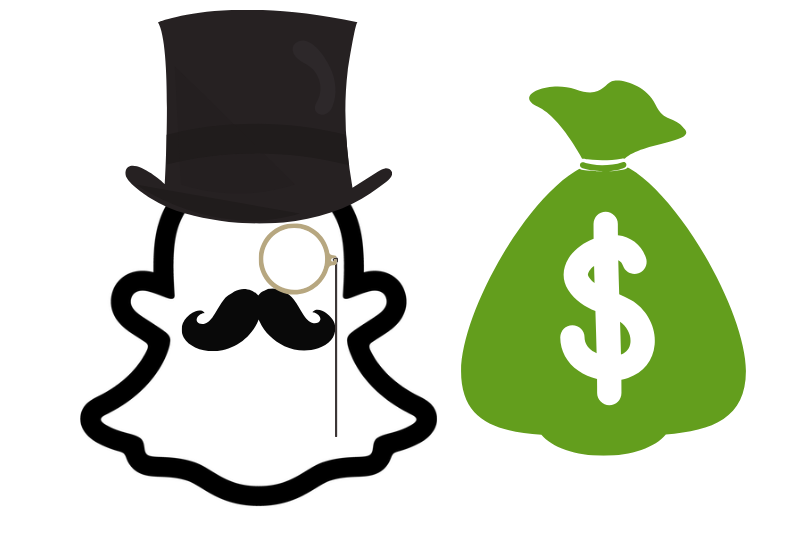 After a poor performing IPO in 2017, Snap stock has been rising since its low in December of 2018. Today, the market cap for the company sits at $17.66 billion. 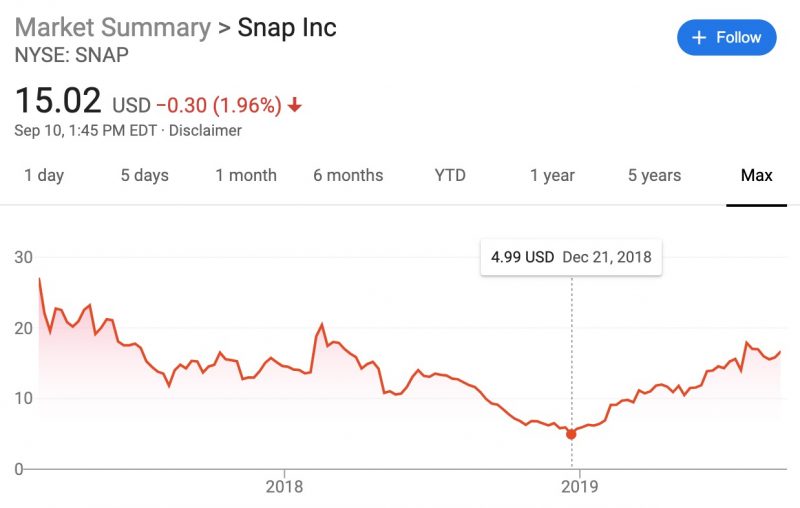 These are metrics app owners and investors love, the continued and regular use of the app throughout the day. Active users open the app 20 times every day. Of these active users, more than 60% create new content every day. Unfortunately, there is no statistic on how many of these new snaps each day are simply meant to upkeep snapstreaks.

12. It would take someone 10 years to view all Snaps posted in the last hour

If you continuously watched Snaps it would take you 10 years to view the equivalent that is uploaded in just 1 hour. By the time you viewed all those Snaps, another 880,000 years of snaps would have also been shared! Of course, lots of those snaps are simply photos or videos of a wall or a flower with a heart emoji just meant to upkeep a snapstreak.

13. Snapchat was the outcome after the founders failed 34 times

As is often the case, your first idea or business venture is not usually the one that hits the nail on the head. Snapchat co-founders admitted to failing 34 times at Stanford University as they sought out a new business idea. They eventually landed on the concept for Snapchat while working on a class final project.

Snapchat users spend, on average, 34 and a half minutes on the app per day. While they’re on the app they send an average of 34.1 messages per day. That means about one message every minute, meaning users aren’t just consuming content, they’re creating new content.

15. Snap recently came out with its 3rd revision of Spectacles

This is a big one, 95% of Snapchat users say that using the app makes them feel happy. Sometimes social media platforms can make people feel lacking. For instance, if you see friends having a great vacation on Instagram and you’re sitting at home. It’s good to hear of an app that truly makes people happy. The ability for people to share personal experiences is humanizing and intimate.

Before launching Snapchat into the stock exchange, the company rebranded Snapchat to Snap Inc. This is believed to align with their new focus on much more than just their chat app. For instance, their augmented reality Spectacles that were released on the same day.

18. Companies are expected to spend $1.5 billion on advertising on Snapchat

The brands that are spending the most on Snapchat ads are Buzzfeed, Comedy Central, and iHeartRadio. Advertising on Snapchat is the companies #1 revenue source and has proved to be valuable for companies who want to reach a teenage and early 20s audience. According to eMarketer, almost one-third (30.7%) of US-based marketers use Snapchat as part of their marketing campaigns.

Snapchat’s Discover channels let users get a glimpse of places, people, and cultures they might not otherwise come across. Snapchat has been readily adding more Discover channels for people to stumble upon. In Q4 of 2019 alone, Snapchat added 78 new international Discover channels. This number is up from 53 in Q3 2019.

Bitmoji’s are pretty darn customizable and there are a lot of options for your character.

Snapchat does not actually keep track of snapstreak (it deletes all of the info) so there are no official stats about the longest snapstreak. That being said, according to the TechJunkie leaderboards, the longer snapstreak as of May 2020 is 1,814 between two people named Daniel and Robin. We don’t have access to the videos, so we can only wonder what their snaps were about.

22. Your videos could stay in the Snapchat servers for up to 30 days

Snapchat claims to not save any videos, but they were called out by the FTC in 2013 for “misrepresenting” how they actually saved snaps. The answer is a bit more nuanced. Snapchat will save your videos on their servers for as long as they need to run the service. Basically, yous snaps stay on the server until the recipient opens them. Sometimes that can mean just a few minutes, other times up to 30 days.   You can read all about Snapchat’s data-saving practices in the privacy policy.

2019 was a good year for Snapchat. The platform experienced major user growth (especially among the younger demographics) over the last two quarters of 2019. Overall, the Snapchat app was downloaded more than 75 million times across all mobile platforms in 2019.

Got any more fun Snapchat facts for 2019 that will wow? If so, leave the feedback below and we’ll be happy to add it to this list!

Back in April, the Australian government released a new app to help slow the rate of Coronavirus. The app, fittingly called ‘COVIDSafe‘, was launched on April 26 and over 2 […]

You live in Colorado and are enjoying the cool crisp autumn weather. You decide you want to head out of town for a bit to go on a hike in […]

How Many Videos Are On YouTube (2019): According To Google