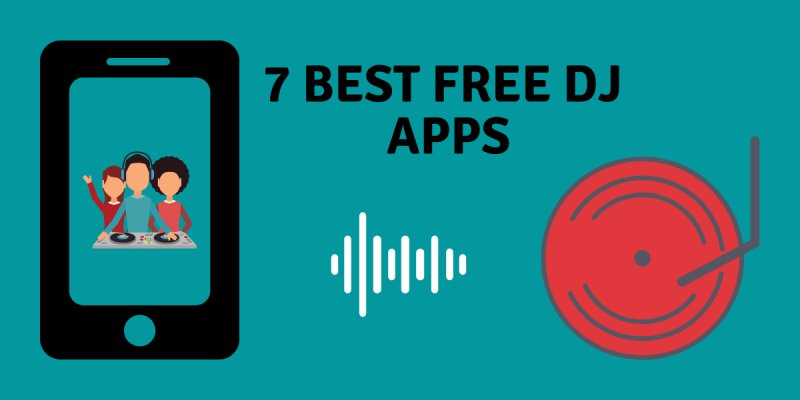 Being a DJ can be expensive. You not only have to buy an expensive set of turntables and equipment but you also likely have to shell out for recording software to mix tracks. Thankfully, advances in technology have significantly lowered the monetary bar for entry into the DJ world. Believe it or not, there are actually a ton of great DJ apps for the smartphone you can download for free.

DJ apps are a bit of a touchy subject in the DJ world. Some purists think that the “real” art of DJing involves physical stacks and turntables. But DJ apps are not meant to unseat professionals and are instead aimed at interested amateurs—people who want to play around mixing their own music for personal use.

Even though they’re geared toward amateurs, some DJ apps have a surprising amount of mixing features. We picked out 7 of the best free DJ apps worth trying. Each app covered is free to download and use, but may include in-app-purchase (IAPs) or premium versions with subscription fees. Most important, theses apps are legit and safe to use.

Before getting started, we should mention that Spotify recently announced that they are going to pull all support from all third-party DJ apps. This is important because a lot of DJ apps pull tracks from music apps like Spotify. For now, everything still works, but some of these apps may lose Spotify functionality in the near future.

1. Pacemaker – Only Available On iOS

With its bright, neon color scheme and simple geometric design, Pacemaker is probably one of the most accessible free DJ apps out there. The app pulls songs directly from your iTunes or Spotify account and mixes them using the built-in sync feature. The circle and simple waveform represent the decks and audio respectively, with a crossfade bar below and slider for setting up headphone cues.

Loading songs is as simple as tapping one of the decks and selecting from your music library. The app will even choose songs for you if you are feeling lazy. The app also lets you loop track, though you have to pay an extra $1.99 to make shorter or longer loops. Aside from the EQ and gain controls, Pacemaker comes with 4 effects: Echo, Roll, Reverb, and a “Hi-Lo” filter. Extra sound effects and filters can be bought with in-app purchases. You can buy the “bundle” of features for $10 which includes the looper, beatskip, and an enhanced FX set.

You can also record mixes made in the app and save them to your device. Unfortunately, though, the recording is only compatible with songs pulled from an iTunes library, not Spotify.

2. DJ Studio 5 – Only available on Android

Up next is DJ Studio 5, another DJ app aimed at a casual audience. DJ Studio 5 has a simple interface that mimics the physical layout of a turntable, which lets you scratch and stall tracks by pressing on the screen. Between the turntables is a crossfader and the waveform bar is located at the top. You can remove one of the turntables and access the sample pad on either the right or left.

Downloading the free app gives you access to 8 sound effects, a three-band equalizer, one cure point per deck, and 10 customizable sample pads, and more. DJ Studio 5 actually includes quite a lot of features in the free version and the developers claim that they only make money from selling premium skins form in-app purchases. They even let you disable ads in the free version!

One other cool feature is that you can share created mixes directly to a Soundcloud account or through social media. It’s Android-exclusive too—sorry iPhone users!

djay 2 is one of the most popular DJ apps on the Apple store and its debut on Android platforms was kind of a big deal. This app comes with all the basics you would expect from a DJ app, including auto-mixing, a basic suite of FX, pitch-bending, looping, cue points, and more. Many users praise djay 2’s excellent Spotify integration and how easy it is to select tracks from your library.

One cool thing djay 2 has is the advanced time-stretch tool. This feature requires at least a quad-core nexus device though. Like DJ Studio 5, djay 2 gives a lot more tools for free than you would expect. In fact, a lot of users say that the paid version is actually not as good as the free version. djay 2 has some buggy issues, but the devs say they are working on a new mobile version for the coming year.

Cross DJ is one of the most powerful DJ apps out there and one that is genuinely multi-platform, with versions available for iOS, Android, Windows, and Mac. Cross DJ’s desktop applications are professional grade, but even the mobile versions are pretty powerful. Like most of these apps, Cross DJ presents a visual turntable that you can use your finger on to load tracks, fade volumes, and sync tempos.

The mobile app for Cross DJ has a really neat BPM detector that automatically detects the tempo of songs and syncs them accordingly. The mobile app also gives you free access to track syncing, pitch-bending, beat-grid editing, looping, and more. You get a good range of free stuff but you’ll have to shell out for the Pro features which include a Hi-Pass, delay, echo, phaser, flanger, reverb, and other FX.

Cross DJ also gives you a 3-band EQ mixer and a customizable sampler with sounds you can add from your own library or buy from the in-app store. Cross DJ also lets you upload mixes directly to Soundcloud right from the app.

Up next on our list is Music Maker Jam, a fun and easy-to-use app for iOS and Android platforms. Music Maker Jam is one of the most popular DJ apps on the app store and has a ton of cool features to spend hours tinkering around with. Music Maker Jam lets you choose from a huge library of 300+ mixes with over 100 loops from different styles of music like hip-hop, rock, funk drum & bass, techno, and more.

Music Maker Jam also includes a free pro-FX equalizer and lets you combine samples to create unique sounds. You can add harmonies, create sub-loops, and lay down your own vocals on top of a backing track. The app also includes a free virtual currency to buy more loops or you can just buy currency with in-app purchases. One really cool feature is the community integration which lets you connect to other musicians, producers, or influencers. We also appreciate the capacity to share songs directly to SoundCloud, Facebook, WhatsApp, or Instagram.

6. Serato Pyro – Only available on iOS

Up next is the iOS-exclusive app Serato Pyro. Serato Pyro is an extremely stripped down DJ app that is meant for mixing songs automatically. You don’t really get control over the mixes and the songs automatically fade one into one another with no gaps in the sound. Pyro works with most standard music playlists to create unique mixes. Pyro’s software automatically scans your music library to pick the optimal song to play after the current one.

Serato Pyro is mostly a hands-off kind of deal, but they give you some tools to tweak the mixes. It has a neat “Smart Sneak” feature that lets you skip to any part of the song without messing up the rhythm and you can change the order of the queued tracks by swiping with your finger.

Serato Pyro is not a good app for anyone who wants to get deep in the weeds with complex mixes, but if you are looking for a simple hands-off way to spin tracks at a party, it’s a great choice.

Last but not least on our list is Edjing DJ Mixer for iOS and Android devices. Edjing DJ Mixer has a sleek and clean interface styled after a physical turntable that you can click on to load the track and swipe to scratch and rewind songs. Each disc gives you the BPM of the currently loaded song and the convenient sync features lets you sync tempos with the touch of a button.

Within each playback pane, you get an EQ and FX box with the basic suite of functions, including fades, reverb, and delays. The app can automatically pull songs from Google Drive, One Drive, and Soundcloud. You get 16 free samples and a 20-sample pack with beats from different genres like EDM, hip-hop, dubstep, etc.

Unfortunately, not all of the awesome tools are free out of the box. Some of the more advanced features and effects require you to buy the full version of the app. However, what you get for free is pretty awesome and is good enough to run a house party or other get-togethers.

You don’t need fancy equipment to make your own tunes. DJ apps are an awesome free way to get into making music and most don’t cost a cent to use. So next time you are at a lame house party, your awesome tracks can save the night.

A new bill worming its way through Congress has drawn ire from free speech and digital privacy advocates. The new bill, introduced in early March and called the Eliminating Abusive […]

Yelp can be a scary place for small businesses. Knowing that your business is at the mercy of the judgment of the masses is intimidating, even if you think things […]