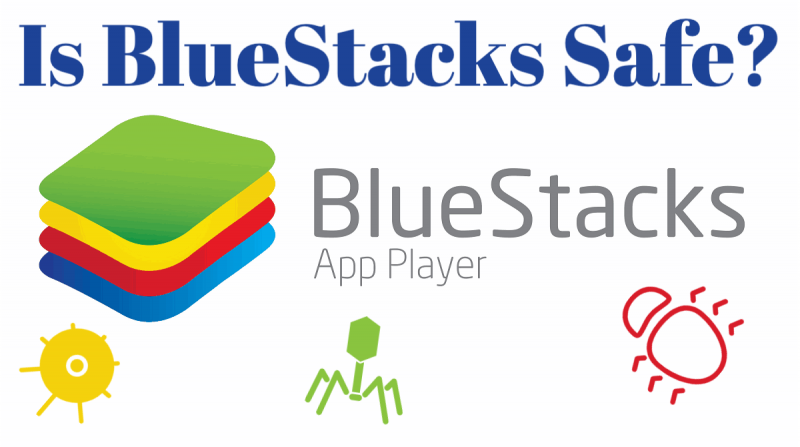 BlueStacks is what’s called an Android emulator. By that, it is a software program that emulates (mimics) the Android operating system.

Bluestacks is free and powerful because it allows you to run Android apps on your computer, be it a Windows or Mac computer. But if you landed on this page you likely already knew that what you’re really wondering is if you can trust BlueStacks or not. So let’s review the safety of BlueStacks.

The first thing to know is that BlueStacks was created 11 years ago and one of its founders, Rosen Sharma, was the Chief Technology Officer of McAfee, the antivirus protection software. BlueStacks also has investments from tech giants like Samsung, Qualcomm, and AMD. That’s pretty good pedigree when it comes to trusting the creators of the app.

You could take my word for it when I say that the BlueStacks app is safe, but you don’t have to. We ran BlueStacks through a number of antivirus scans and here are the results. 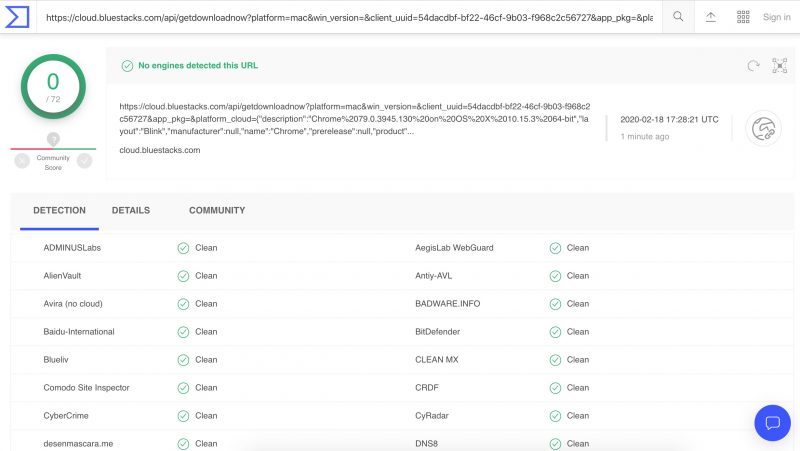 VirusTotal scanned the BlueStacks app and checked it against 64 virus directories and every single one found that it was clean and without any virus.

Kaspersky helps to protect over 400 million users from viruses. We ran the download file through their online VirusDesk scan and found that BlueStacks was safe from any virus. 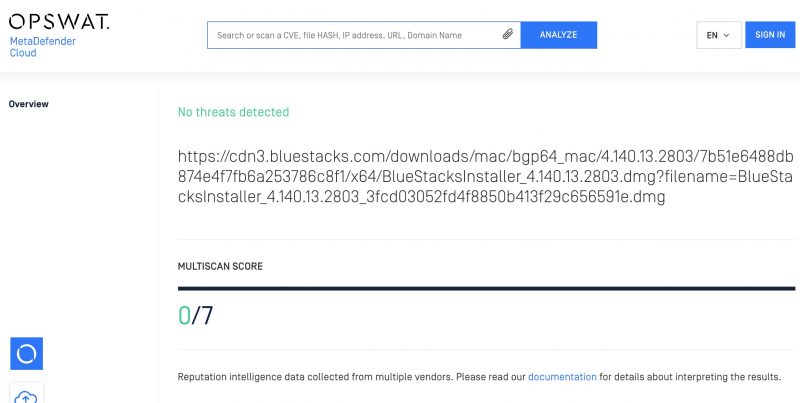 Lastly, we scanned the file through the OPSWAT online virus scan and found that there are zero threats found in the file.

ADVERTISEMENT
To conclude, we believe the actual software app BlueStacks is completely safe. We’ve used BlueStacks personally for years without any issues and it passed every virus scan we analyzed.

Here’s How BlueStacks Can Be Unsafe!

What do we mean by this? Let’s use an example. When you download the Windows operating system on your PC you can be sure that Windows is safe to use. Why? It’s been vetted by millions of users and is developed by one of the largest companies in the world. However, that doesn’t mean Windows is immune to viruses. The fact that Windows allows you to install software that works on Windows opens up the opportunity for a virus to make use of Windows and infect your computer.

In the same light, BlueStacks can lead to a virus on your computer if you download an app to run on BlueStacks that hosts a hidden virus.

Thus, it’s vital to only download official apps from Google Play to run on BlueStacks!

In our interconnected world, novel technology could empower just one fanatic, or some weirdo with a mindset of those who now design computer viruses, to trigger some kind of disaster. Indeed, catastrophe could arise simply from technical misadventure – error rather than terror. – Martin Rees

Thus, we also recommend downloading an antivirus app to run on BlueStacks as well as your Android phone.

Avast has a very reputable, constantly updated and high-quality antivirus scan for Android. With over 100 million installs you can be assured that if an app has a virus and install it on BlueStacks it will catch the virus and block it. 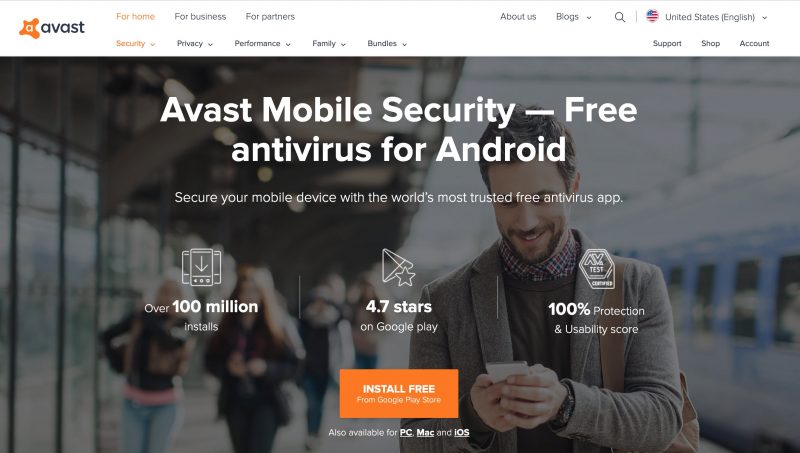 While an antivirus scan is helpful, we can’t emphasize enough that the number one best approach is to only download apps on BlueStacks from the official Google Play store.

Google has a strong vetting process to make sure there are no viruses included in the apps on Google Play. While they aren’t perfect, it’s a great first screening of apps. At the end of the day though, it’s up to you to do the research to figure out if a given app is safe to download.

A Word From BlueStacks On Safety

What does BlueStacks have to say about the safety of their app? A Twitter user asked them directly and they adamantly stated that it is completely safe. 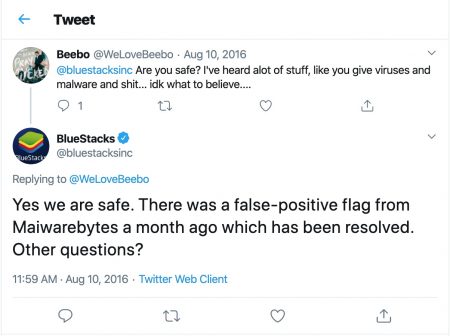 However, BlueStacks does have an article that talks about how antivirus apps on the platform slow down the performance of the software. In the article, they advise disabling antivirus apps to improve performance. You have to gauge for yourself whether this is something you want to do.

On the plus side, BlueStacks does not gather personal information and it only sends anonymous statistics to servers to get feedback on performance. You can turn off data statistics too if you prefer.

As noted above, you will have to decide whether you want to err on the side of safety with a virus scanner running in the background or performance when gaming.

BlueStacks is known as a CPU, graphics, and RAM hog, meaning if you don’t have a powerful computer you could find that some games will lag or be slow. 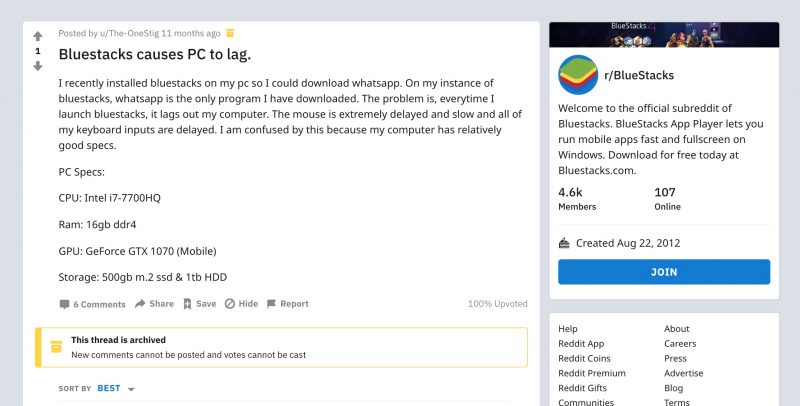 There are several threads on Reddit and Microsoft forums that complain about how much BlueStacks slows down their computer. The screenshot above is an example, you can see that this person has pretty good stats on their computer and a good graphics card yet BlueStacks still causes their PC to lag when only running WhatsApp.

BlueStacks has tips for helping to improve the speed of the app. However, after implementing these, the only things that seemed to improve speed were to close other apps and disable antivirus, which causes increased safety concerns. Beyond that, the only thing that would speed things up is to make your computer more powerful: namely, increase the RAM and upgrade the graphics card.

By the same token, BlueStacks can be a battery killer on laptops, especially if you are trying to run any developer tools. BlueStacks also offers some tips on how to adjust your PC’s power consumption to minimize performance issues.

BlueStacks is a pretty robust piece of software and it emulates some powerful smartphone tech. So you need to make sure your PC has the right hardware specs to handle the emulation.

According to the developers themselves, you should run the emulator on a desktop running Windows 10 with at least an Intel Core i5-680 processor, 6GB of RAM or more, and at least 40GB of HDD space (SSD is preferable).

The devs recommend running BlueStacks on Windows but there is also a version for Mac. However, the Mac version has fewer features than the Windows version, suffers from some notable performance issues (mostly lag), and generally has inferior reviews compared to the Windows version.

Unfortunately, Bluestacks does not currently offer a Linux version, so, sorry Ubuntu users—you’re left out in the cold. However, if you want something like BlueStacks but prefer running Ubuntu, then the devs recommend installing Genymotion, an Android emulator that supports Linux architecture. Android architecture is actually built on top of the Linux kernel, so it’s possible we may see a Linux-compatible BlueStacks sometime in the future. But the devs haven’t said anything as of yet. 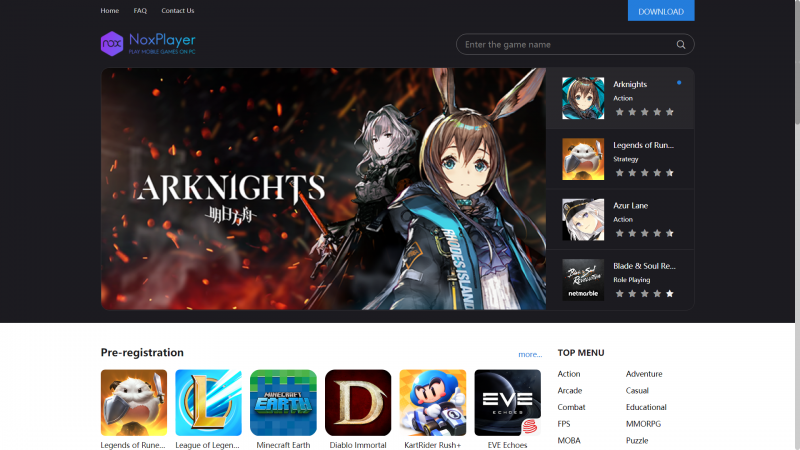 You can also test Android apps that you may have built using the Nox emulator. This is a nifty feature if you lack the tools to directly test apps on Android-enabled devices. Nox also lets you play Android games at 720p and allows for camera and voice controls.

BlueStacks is absolutely safe to use. However, there is a risk that an app you install on BlueStacks would lead to a virus. To help prevent that from occurring make sure you only install apps from the Google Play store and install an antivirus scan for BlueStacks.

Don’t forget to Bookmark this page to use in the future! NOTE: The Instagram line break and spaces generator is only available on our non-amp page, click here to access […]

In Snapchat’s years it went from a concept in dorm rooms of Stanford to a multi billion dollar company on the stock exchange. It has become the app of choice […]