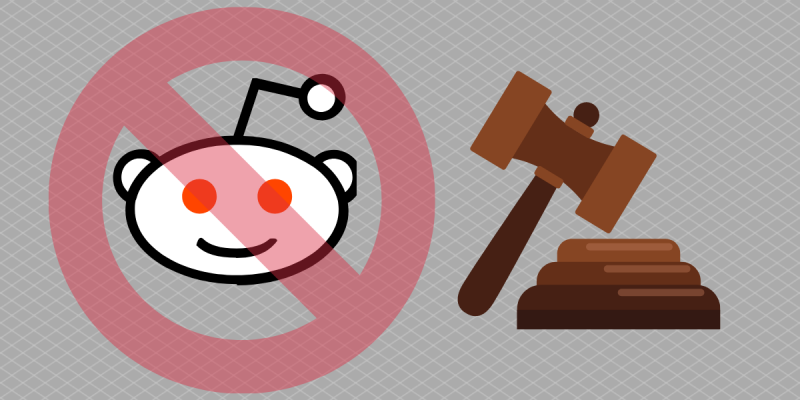 Administrators and moderators of the popular social media platform banned over 2,000 communities this past Monday as part of its new expanded community guidelines on acceptable content. Two of the most high profile communities—called “subreddits” —banned were r/The_Donald, a subreddit dedicated to supporters of Donald Trump, and r/ChapoTrapHouse, a subreddit for fans of the leftist comedy podcast Chapo Trap House. The bans come on the tail of new community moderation guidelines that aim to reduce the amount of hate speech, racism, and harassment on the platform.

These widespread moderations are a significant change of pace for Reddit, who until recently, took a more hands-off approach to moderation. Reddit has come under fire in the past for hosting objectionable material on its site, so much so that there is an entire Wikipedia page related to controversial Reddit communities. Reddit has normally taken a very lax position on censoring site content. Back in 2014, the site received harsh criticism for failing to take down a subreddit disseminating stolen nude pictures of several celebrities until a week after the subreddit had been created.

The new bans signal a change in tune for Reddit executives. “Ultimately, it’s our responsibility to support our communities by taking stronger action against those who try to weaponize parts of Reddit against other people,” Reddit CEO Steve Huffman stated in a recent company announcement on the site. “In the near term, this support will translate into some of the product work we discussed with mods. But it starts with dealing squarely with the hate we can mitigate today through our policies and enforcement.”

According to Huffman, the majority of the 2000 banned communities were inactive and only about 200 had more than 10 daily users. However, there were a few larger subreddits covered in the ban. 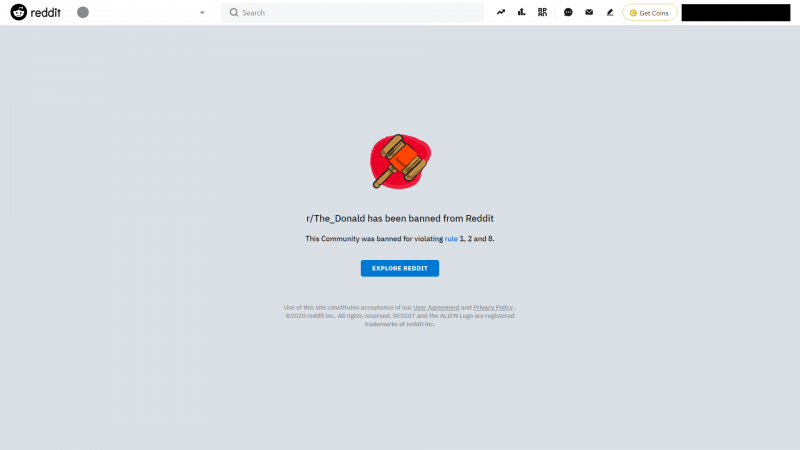 By far the most popular community banned was r/The_Donald, a subreddit made up of supporters of President Donald Trump. r/The_Donald has received a lot of media attention in the past and Trump himself has been known to share memes and videos from the subreddit. At the time of banning, r/The_Donald had almost 800,000 users, making it one of the largest subreddits ever to be banned on the platform. r/The_Donald had been sanctioned by the platform before and has received criticism for spreading misinformation during the 2016 presidential election.

Among the larger banned subreddits was also r/ChapoTrapHouse, a subreddit dedicated to the popular leftist podcast Chapo Trap House. Like r/The_Donald, Reddot admins cited consistent posting of rule-breaking content and poor moderation efforts as reasons the subreddit was banned.

As part of its new community guidelines, Reddit has introduced 8 new rules governing what type of content can be hosted on the platform. Examples of objectionable content banned by the new policies include things like “post[s] describing a racial minority as sub-human and inferior to the racial majority,” or “comment[s] arguing that rape of women should be acceptable and not a crime.” 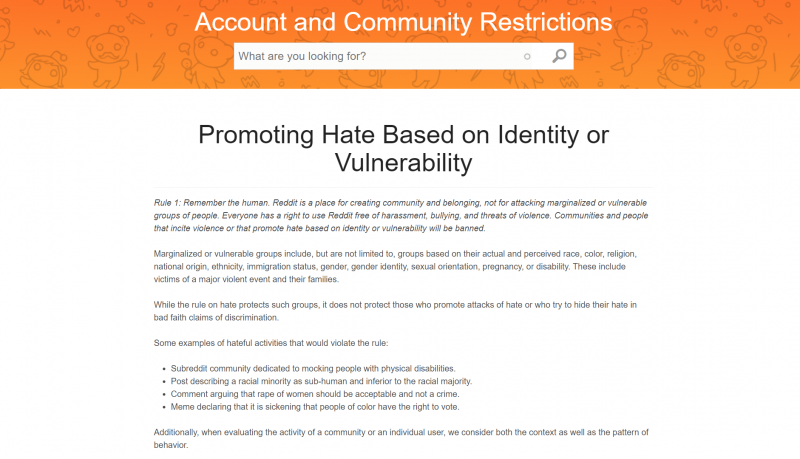 Other popular subreddits affected by the ban include:

Reddit is not alone in its bans either. Various other social media sites have recently banned users and profiles for similar issues. For example, Youtube recently banned the channels of Stefan Molyneux, Richard Spencer, and David Duke, all of whom are prominent members of white nationalist and white supremacist groups. Many of these crackdowns were motivated as a response to heightened political tensions following nation-wide protests against the killing of George Floyd by Minneapolis police officer Derek Chauvin in late May.

Reddit has long had issues regarding objectionable, offensive, and illegal content on its platform. Back in 2012, Reddit was the center of a media firestorm over r/jailbait, a subreddit dedicated to sharing suggestive photos of minors. Reddit eventually banned the subreddit after CNN aired a spotlight about the community.

In 2015, Reddit instituted a similar round of bans aimed at removing hateful communities that were harassing users on the platform.  The most popular subreddit banned during this round was r/fatpeoplehate, a subreddit dedicated to ridiculing pictures of overweight people. In most of these cases, Reddit only capitulated to demands to remove content after intense media and public scrutiny.

In the past, Reddit has been very hesitant to remove content because it is found to be objectionable. The company would only penalize communities if they engaged in harassment on the platform. “We’re banning behavior, not ideas,” stated an admin comment in a 2015 post about the then-recent bans. “While we don’t agree with the content of the subreddit, we don’t have reports of it harassing individuals.” This particular comment was in response to a question asking why the company had not banned r/coontown, a subreddit dedicated to sharing derogatory memes and pictures of black people.

Many people blame the nature of Reddit as the source of its moderation trouble. Subreddits are moderated by mods, who volunteer for the position. The decentralized nature of Reddit moderation has made it very difficult for the site to have a universal moderation policy across the whole platform. Moreover, the subreddit/community nature of the platform lends itself to the creation of insular communities that share beliefs and attitudes.

Obviously, not everyone is happy with the bans. Critics have taken to social media, lamenting Reddit’s new policies on censorship, with many calling the new policies an infringement on free speech. Senator Ted Cruz [R-TX] joined in, stating “The assault on our culture of free speech continues.”

The assault on our culture of free speech continues.https://t.co/pxLHO3dbTf

The situation is made even more complicated by the unique role that subreddits like r/The_Donald have played in the current political landscape. Several people have criticized Reddit admins for taking so long to ban the community, stating they feared a public backlash if they banned the predominately conservative subreddit.

In fact, activity in r/The _Donald had already greatly stalled before the actual ban. The subreddit was “quarantined” about a year ago due to users posting violent content, including threats against Oregon police and public officials. Quarantined subreddits do not show up in Reddit’s search function and also do not appear on the front page. Activity in the subreddit had already greatly declined in the past few months and a large segment of the userbase has already migrated to a new platform off of Reddit.

This is why we closed up shop there and migrated to https://t.co/6lTh9kUqK6 3 months ago. Writing was on the wall.

Many other social media companies have taken recent steps to remove or otherwise flag objectionable content on their sites. Twitter updated its content policy back in March to cover tweets containing dehumanizing remarks related to age, disability, or disease. In the past few days, Youtube has banned several popular channels, including that of conspiracy theorist and white nationalist Stefan Molyneux. Molyneux is best known for his podcast FreedomainRadio and has cultivated an extremely large internet following with his videos and lectures.

The newest round of bans and moderation raises a recurring question regarding the role that social media companies should play moderating content on their platforms. As the law currently stands, platforms are generally not held responsible for any content that is published by its users. That means that sites like Twitter cannot be held legally responsible if someone uses the platform to post illegal content.

The rules are much muddier when it comes to offensive racist/misogynistic content or hate speech. In the 2019 case Manhattan Community Access Corp v Halleck, the US Supreme Court ruled that private actors that provide platform are not stated entities, and so free speech protections do not apply to them. This seems to give prima facie justification to the view that censoring on social media sites is not a First Amendment issue. Social media sites are legally allowed to penalize users and remove content that violates their community guidelines.

However, in late May, the Trump administration signed an executive order aimed at penalizing companies that “use their power over a vital means of communication to engage in deceptive or pretextual actions stifling free and open debate by censoring certain viewpoints.” The executive order was announced just a few days after Twitter flagged one of the president’s tweets in which he advocating that protestors be shot on sight for looting. Twitter flagged the tweet, stating that it violated their community guidelines, but that they would leave the Tweet accessible in the public interest.

Reddit’s new wave of bans will almost definitely kick off a new segment in the Trump administration’s crusade against social media companies. In the meantime, Reddit’s new content policy could signal a new ethos for a platform that has long been plagued with objectionable, racist, and violent content. As more platforms take steps to moderate political content debates about free speech and internet censorship are bound to continue.

We scoured the internet, our Snaps and everywhere we could find to come up with every acronym and slang word that you’re likely to hear on Snapchat. While these slang […]