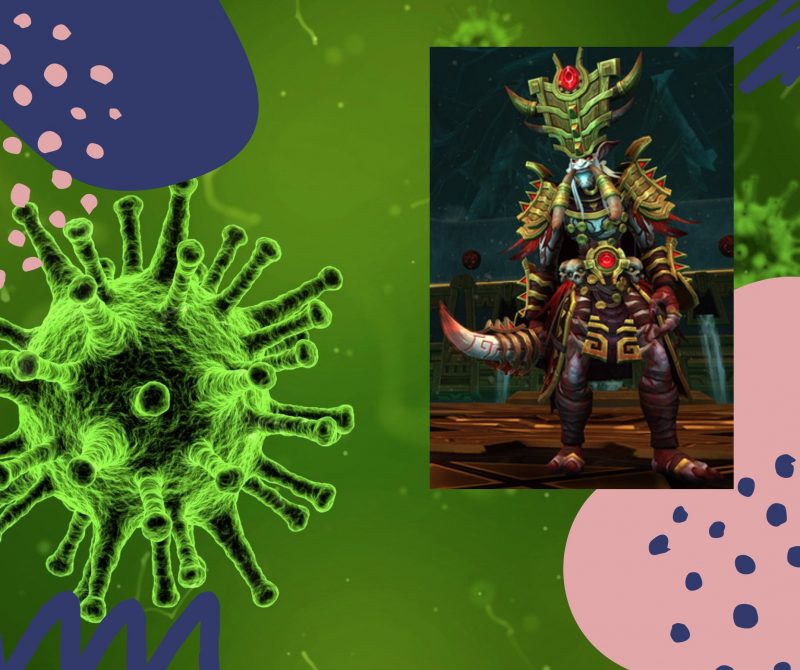 Pandemics by their very nature are difficult to predict. Human behavior is a major factor in the spread of disease and it’s extremely difficult to accurately predict human behavior in the long run. This inherent unpredictability makes understanding how disease spreads a difficult task for mathematical modelers.

In the wake of the recent Coronavirus (COVID-19) outbreak, we’ve seen typical instances of irrational human behavior during times of panic. Some live in denial and insist on meeting up in public spaces and others over cautiously safeguard themselves via social distancing. The panic inspired by the outbreak has shown us that many public systems are ill-equipped for handling mass outbreaks on a global scale.

Luckily, we can turn to some nifty epistemological models to better figure out how diseases spread. To be specific, the key to modeling epidemics might lie in a weird virtual outbreak that took place in World of Warcraft 15 years ago—an infamous occurrence that has come to be known in the annals of internet history as the Corrupted Blood incident.

Back in 2005, Blizzard introduced a new raid dungeon to WoW called Zul’Gurub that featured a unique end boss Hakkar the Soulflayer. Hakkar was equipped with a particularly nasty debuff spell called Corrupted Blood that would put a continuous drain on the player’s HP. The Corrupted Blood debuff was extremely contagious and would spread to other players in the vicinity of the infected.

Corrupted Blood was only supposed to be active for a few seconds and only function within the new dungeon. However, Blizzard left in an oversight that allowed pets and minion creatures to serve as incubators of the debuff and take it out of its original confines. The result was a virtual worldwide pandemic where the disease spread to every corner of the map.

The main problem was that Corrupted Blood was a high-level spell that did large amounts of damage which could outright kill lower level characters. Players recount bodies littering the city streets as their characters kept contracting the disease, dying, respawning, and dying from the disease again. Death isn’t permanent in the World of Warcraft but it carries some frustrating penalties.

Through a combination of both accidental and intentional spread, the virtual outbreak overtook three servers and greatly disrupted normal gameplay. During the panic, players evacuated larger cities and fled to the less dense countryside, leaving behind cities littered with player character remains. After some initial failed quarantine efforts, Blizzard had to perform a hard reset of the servers to patch out the bug. All in all, over 4 million players were infected and the digital pandemic lasted from September 13 to October 8, 2005; almost a full month of virtual terror.

A Model for Pandemics?

An epidemiologist and WoW enthusiast named Eric Lofgren noticed parallels between the 2005 Corrupted Blood incident and real-world outbreaks. In 2007, Lofgren co-authored a paper published in Lancet Infectious Disease explaining how the Corrupted Blood incident could be used to refine mathematical models of how pandemics spread. Lofgren and his co-author Nina Fefferman argued that the realistic reaction of WoW players during the outbreak offered a suitable model for human interaction during pandemics.

Lofgren and Fefferman were struck by how faithfully player behavior mirrored real-life behavior during outbreaks. For instance, large numbers of players volunteered their healing services to resurrect lower level players that kept dying, only to make the disease worse by not allowing it to run its course. Other players scrupulously stockpiled healing materials and sold them for high prices to desperate players, offering many similarities to what we see today with Coronavirus (COVID-19). Some players intentionally sought out the disease as a kind of thrill, and some players would maliciously try to spread the disease to other players.

Unfortunately, documented screenshots and evidence of the incident are sparse given that it occurred in 2005, before screenshots and video streaming were common in online games. But there are a few videos floating around that capture the madness in full swing.

Lofgren and Fefferman argued that the Corrupted Blood outbreak showed that virtual worlds like (Massively Multiplayer Online Games) MMOs could be a potential exploitable resource for mathematical models of disease. In their own words: “…future experiments could easily tailor the parameters controlling disease transmission and mortality to more accurately reflect a wide variety of pathogens.”

Lofgren currently works at Washington State University. His current work focuses on the stress that viral and bacterial outbreaks like Coronavirus place on health care systems.

How Is Disease Modeled?

Modern epidemiological models rely on two fundamental notions to predict the transmission of disease: the reproduction number and the endemic steady state.

A disease is said to be in an endemic steady state when the reproduction rate R multiplied by the susceptibility of the population S is RS=1. When a disease is in an endemic steady state, then each person is infecting exactly one other person and the rate of disease stays constant. If RS>1, then the disease will spread. If RS<1 then the disease will die out.

According to Lofgren and Fefferman’s analysis, the initial Corrupted Blood outbreak had a reproduction rate R of 10² meaning that a single-player could infect a staggering 100 players per hour. According to their analysis, the disease would have run its course if not for the presence of asymptomatic NPCs that populated infected areas. The presence of asymptomatic NPCs created a virtually unbroken chain of infection between NPCs, players, and pets. Given the presence of this infection chain, the virus quickly spiraled out of an endemic steady-state and rapidly spread.

How Can Virtual Spaces Help Us Understand Disease?

It is easy to see how the basic parameters of an epidemiological model can be understood in the context of a virtual world. Each player has a certain “distance” to other players and a certain level of susceptibility based on their in-game behavior. In the case of the Corrupted Blood incident, the virtual virus was extremely contagious so a single player could infect many players in a short time period. The fact that pets, minion creatures, and NPCs could spread the disease without showing symptoms lines up with the real-world phenomena of asymptomatic carriers.

One of the more difficult parts of modeling epidemics is taking into account human behavior. Human behavior is an important factor as it has a large impact on the effective reproduction rate of the disease and the susceptibility of potential carriers.

The behavior of players during the incident also gave a unique window into the psychology of pandemics. Players reacted in realistic ways during the virtual pandemic, with positive and negative effects. For instance, many players immediately vacated densely populated locations for the relatively safe countryside. Others offered healing assistance to players and moderators attempting to quarantine the bug, only to further exacerbating the crisis by keeping players alive and allowing them to infect more.

Some players ignored any quarantines and went about their business as usual. There were even players who intentionally and maliciously tried to spread the bug to others as an exercise in trolling new players. The uniqueness of the WoW outbreak is that it gave a real-time simulation of a pandemic which potentially has implications for our understanding of human behavior in real pandemics.

Lofgren and Fefferman argue that video games can be conceived of as a kind of “agent-based epidemiological model” that can model the behavior and decision-making of people during outbreaks. “Human-agent simulations, where the subjects are virtual but have their actions controlled by human beings interacting with each other, may potentially bridge the gap between real-world epidemiological studies and large-scale computer simulations. ”

They recognize that games-as-models have some limitations though. First of all, player behavior in games may not necessarily reflect real-world behavior. Also, simulations using games would be limited in computing power, which would put a theoretical maximum on the number of agents and interactions. According to the authors, “These computational limitations imply that attention will need to be paid to issues of scalability of result.”

Nonetheless, the virtual worlds of MMOs give an interesting window to observe human interaction and could shed some light on how large stochastic systems work. For example, the popular space MMO Eve Online is well known for its large and complex player-driven economy which has been studied by academic economists. Virtual MMO spaces like WoW and Eve Online are a fruitful environment to understand complex human systems because virtual spaces serve as a proxy for real spaces. They reflect the macro-scale social dynamics that give rise to complex emergent social phenomena. Habits and behaviors in the real sphere are translated to the virtual, so we can make inferences in one domain by observing the other.

So it should come as no surprise that virtual worlds can give us insight into the structure of real society. After all, the virtual is simply an extension of the real and is presumably bound by the same laws that drive social interaction in the real world. Virtual societies are certainly not a perfect analog but like all models, the main question is whether they are useful for modeling real-world phenomena.

For us, an Instagram caption was usually the last thing we did when putting together a post. You find the perfect moment to capture a photo or video, choose the […]

YouTube recently hit a huge milestone, over 1 billion hours of videos are watched each day. On top of that, the number of YouTube channels with over 1 million subscribers […]